The Best New England Clam Chowder Recipe (Serve it Like This) Is there ever a bad time for chowder? This New England clam chowder recipe is rich, hearty, comforting, and loaded with flavor. It’s the perfect comfort food for colder months—a quiet winter night or crisp fall day.

What Is in New England Clam Chowder?

Clam chowder is a thick, rich, creamy, hearty soup that’s typically made with:

There are many different types of chowders—and many varieties of clam chowders—but New England clam chowder is the most popular.

This New England clam chowder recipe is made with a simple cream of celery soup base from onions, flour, milk, celery, and bone broth.
Sauteed bacon adds smoky flavor, while clams are salty and tangy, with a satisfying, chewy texture. Fork-tender potatoes are added at the last step. Once the cream of celery soup is combined with clams, potatoes, milk, and dill weed, the chowder is ready to be served in a warm, soft sourdough bread bowl or topped with crunchy crackers.

The prep time for this recipe is only twenty minutes because we’ve taken a little shortcut. Instead of using fresh clams, we’ve opted for canned clams. This makes the New England clam chowder recipe quicker and easier to prepare, reduces the cost of ingredients (fresh clams can be more than triple the price), and the clam juice adds extra flavor.

This clam chowder recipe has less than 600 calories per serving (not counting calories from bread or crackers if added).

As a cream-based soup, traditional New England clam chowder tends to be higher in saturated fats and is loaded with sodium. However, this version is lower in sodium—530 mg— because it’s made with Kettle & Fire Bone Broth, rather than regular broth or stock, which is usually high in sodium.

This New England clam chowder recipe is rich, creamy, savory, and satisfying. Ready in 50 minutes. Made with bone broth for a new twist on an old classic.

Sharon Chen is the founder and creator behind StreetSmart Kitchen, a recipe website that helps busy professionals to prepare healthy meals in less time they ever thought possible. Download her Top 18 One-Dish Meals Cookbook for free here: http://bit.ly/SSK-Free-Cookbook 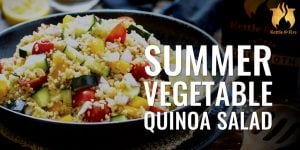